Work to open up the dock feeder canal, part of a wider masterplan to create a new vibrant Canal Quarter in the east of the city centre, has begun. 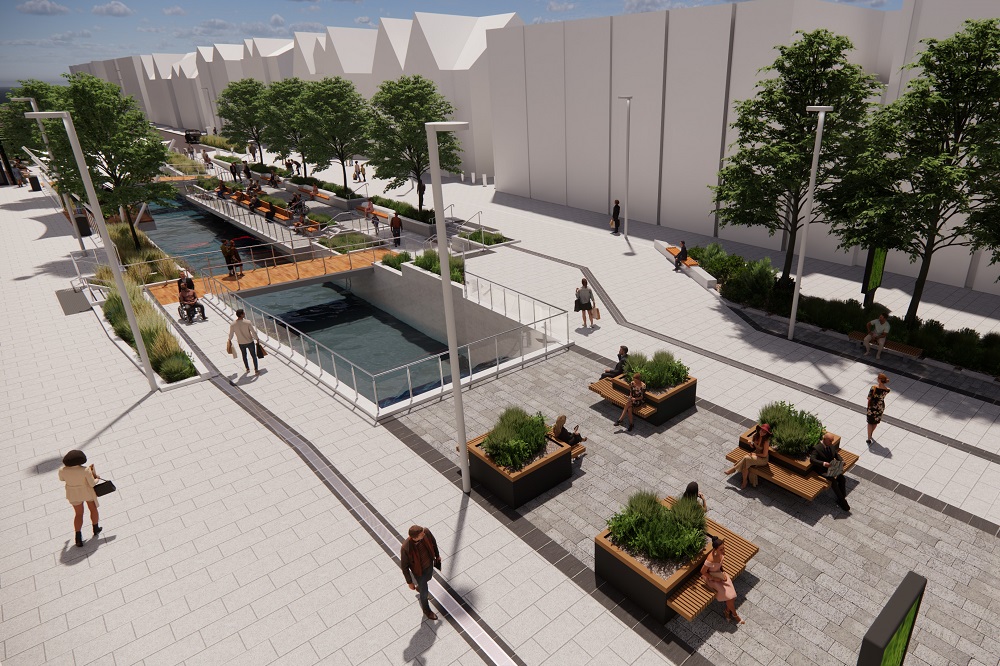 The works which are scheduled to run for twelve months will see Churchill Way, north of North Edward Street, closed to traffic during that time.

The opening up of the canal will create new, green, public space, with rain gardens to manage surface water drainage, outdoor seating and an amphitheatre-style, outdoor performance area.

The wider masterplan for the Canal Quarter, which includes extending the canal further down to the dock feeder south on Tyndall Street was approved by Cardiff Council’s Cabinet in May last year.

As part of this scheme, Station Terrace can no longer to be used for through traffic. Only taxis and buses will be allowed to use this road in either direction in order to give buses priority to travel in and out of the new bus interchange on the east side of the city when it is completed.

With funding from the City Deal and Welsh Government, significant improvements will be also made to the public realm, with a new cycleway on Station Terrace, wider pavements and improved crossing facilities around Cardiff Queen Street train station, and a new improved junction between Adam Street and Churchill Way.

Public consultation on the first stage of re-opening the canal and the transport scheme took place with residents and businesses before the pandemic began and all of the feedback received was assessed before the final design was agreed.

Cllr Michael Michael, Cabinet Member for Clean Streets, Environment and Recycling said: “The opening of the dock feeder canal and the new transport scheme will not only mark the beginning of a new district centre for the city and act as a catalyst for new investment, but it will play an essential role in managing traffic flow and surface water drainage in the city centre.

“A series of rain gardens will be built, with specific soil and planting to treat the surface water to remove pollutants before the water flows into the canal. This will ensure that 3,700 m2 of water will be diverted away from the sewage system each year, reducing the cost and energy of treating this water through the sewage pumping station at Cardiff Bay.”

This new development and the wider masterplan will bring much-needed jobs during the construction phase, as well as long-term employment opportunities when the scheme is complete.

Access to businesses on Churchill Way will be unaffected by these works and the taxi rank will be moved to North Edward Street, where new electric charging points will be installed for the trade to use.
…